We’ve all heard it, the iconic song about the iconic cross-country highway. For those you who have never traveled the now lonely road, let’s make a few virtual stops on this historic route spanning over 2000 miles from Chicago, Illinois to Santa Monica, California.

The Blue Whale can be found in Catoosa, OK. This huge structure is 80 feet in length and 20 feet tall. Built by Hugh S. Davis in 1972 as an anniversary gift for his wife, Zelta, it was a great place to cool off after a hot day on the road. The attraction closed in 1988 but was restored and reopened in 1997.

If you find yourself in Holbrook, AZ, make a stop at the Wigwam Motel. You can even spend a night in a “teepee.” Owner and operator Chester E. Lewis, who ran the business until he sold it in 1974, completed construction of Wigwam Village Motel #6 in 1950. In 1988 Lewis’ wife and children bought and re-opened the motel. 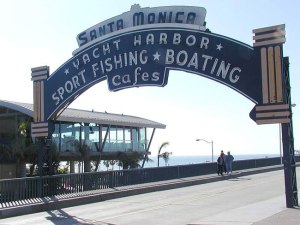 You’ll come to the end of the road at Yacht Harbor Pier in Santa Monica, CA. The Santa Monica Pier had a rich history of its own before it was officially assigned the West Coast’s conclusion of Route 66 in November 2009. The first pier was constructed in 1909 and has been altered, enhanced and renovated a few times since.