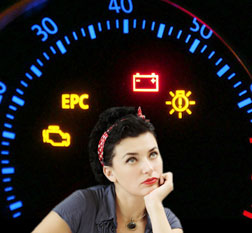 Most drivers tend to ignore those pesky little warning lights on the dashboard gleaming back at them and continue to drive anyway, waiting on average almost two weeks before getting it checked out. Why? Simply because they don’t fully understand what those lights mean. Even the most common ones, like the tire pressure, engine emission and fog-light indicators often go unattended to for lack of understanding. According to a survey conducted by a British automotive breakdown service, almost half of the participants involved could not identify their brake warning light, and more than 35 percent didn’t recognize their airbag warning. Not knowing these signs could potentially create a dangerous situation.

Another reason why there is an increase in drivers who are confused when it comes to their dashboard is partly due to the fact that newer vehicles are now equipped with more buzzers and lights than ever before. “As in-car technology becomes more advanced, there are now more and more in-car gadgets with symbols that support everything from the car’s satellite navigation system to its heating and cooling options,” said a spokesman for the survey.

It was concluded that of the 99 different dashboard lights identified in the study, just 12 of the lights were common across all vehicle models.